A 2 Hour Marathon World Record Time: A Look at the Numbers 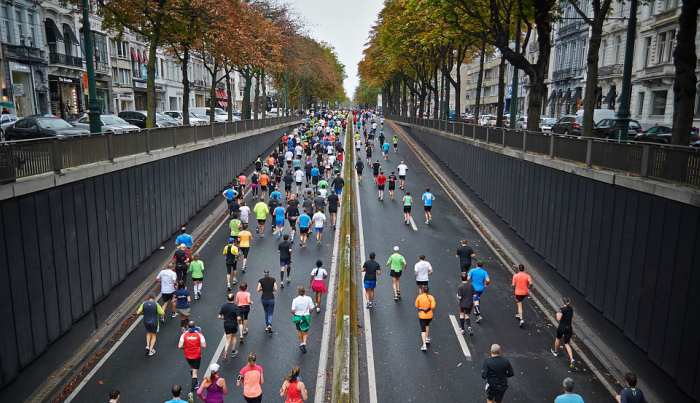 Not long ago, Nike announced their “2 Hour Marathon Project,” an effort to see the first marathon ever run under 2 hours. Although the lore of the marathon makes this an exciting topic to consider, many runners doubt it’s even possible. The fastest marathon time today is still a long way from 2 hours. Let’s look at the numbers to see what a runner needs to run under a 2 hour marathon.

The numbers behind the 2 hour marathon

That may not sound like a lot, but world class athletes already operate at the limits of human performance. Dropping even a few seconds per mile represents an enormous effort for people already maxing out their speed. Remember that these athletes train and race as their full time job. World class Kenyan and Ethiopian runners are born at high altitudes. Many of them run or walk long distances to school and develop immense cardiovascular abilities from a young age. When they become professional runners, they train under world class coaches and race with world class competition. They spare no effort to raise their race results to the absolute peak of their abilities.

In spite of this background, not one of them has so far come even close to breaking 2 hours. The current world record is almost 3 minutes away. Any top runner will acknowledge that 3 minutes in a marathon seems like an eternity.

The 2 hour marathon: What would Usain Bolt think?

To give an idea of how incredible a 3 minute marathon record improvement would be, consider Usain Bolt’s 100 meter world record. Bolt ran 9.58 seconds at the 2009 World Championships in Berlin, Germany. No one else (besides Bolt himself) has ever come within a tenth of a second of this remarkable record. Bolt dominated this event for years, setting many world records and winning nearly every Olympic and world championship sprint race he competed in.

The marathon world record requires a 2.4% improvement to go under 2 hours. A 2.4% improvement in the 100 meters would take Bolt’s time down to 9.35 seconds. And yet some scientists and exercise physiologists have stated that the theoretical limit for human sprint times tops out at around 9.4 seconds. 9.35 seconds would shatter that barrier.

It’s also noteworthy to consider the cause behind the explosion in marathon times in recent years. The marathon used to be an event for aging track stars to finish their careers. Paul Tergat, former 2:04:55 world record holder, didn’t run his world record time until the age of 34. And his great rival Haile Gebrselassie of Ethiopia ran his 2008 world record of 2:03:59 in Berlin at age 35.

Nowadays, more and more young athletes in their early 20’s are taking on the challenge of the marathon and skipping the track altogether. This naturally leads to faster times, since these young marathoners attack the race in their physical prime, and without the cautious approach an older, more experienced runner might take.

The numbers show that this is happening. In 2008, only a single man broke 2:05:00. By 2012, just 4 years later, 11 men broke the 2:05 barrier. It’s now common in big city marathons like London, Chicago, and Berlin for top athletes to break 2:05 and attempt the world record. Times are getting faster and faster. But will they ever get fast enough to break 2 hours?

The 2 Hour Marathon: The Everest of Running

A look at the numbers reveals the 2 hour marathon to be an imposing feat. For runners, it could almost be called the “Everest” of marathoning achievements. But many climbers have climbed Everest. No runner has even come close to breaking 2 hours. Can anyone do it? Only time will tell.