Home » Magazine » Triathlon » Why are triathlons so addictive?

Why are triathlons so addictive? 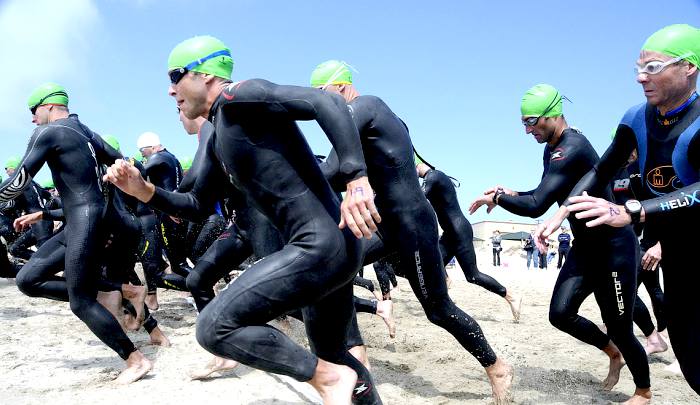 Triathlon is considered to be one of the most challenging and interesting sports. Since it first came to life, it has grown an impressive large number of people who love and practice it. Even though the first recorded triathlon took place back in 1974, the booming of this super-challenging sport has only happened these last 5 years.

Triathlon is one of the most watched sport event especially in Olympic races. Enthusiasts and participants from all over the world have created the International Triathlon Union (ITU) which holds over 100 worldwide triathlon events each year.

Another incredible fact is that more and more people are showing a growing interest in participating and registering themselves in the next triathlon events. Starting from professional athletes, swimmers and cyclists, to normal and passionate people who love challenging themselves. Finishing with celebrities who want to prove their sporting abilities and will, the sport of triathlon allows everyone to prove the abilities and character by stretching their powers to the limits.  But, what are the other reasons people have started to love triathlons so much? Which are the main benefits and lessons each person can learn by involving themselves to this challenging sport? Here are our top reasons why everybody loves triathlons:

Doing a triathlon means you’re about to get some incredibly health benefits. Despite professional athletes who have competed on triathlons and other sports during all their life, many participants are normal people who love the health benefits triathlon has to give. Some of them are: losing weight, strengthening the muscles, regulating the blood pressure, and get a stronger heart and many more.

The triathlon ideology accepts everyone as the winner. When someone participates in a triathlon, after many months of hard and intensive trainings sessions, has only one main intention: to finish and be able to perform well in all three disciplines that triathlon contains. No one really registers himself in a triathlon only to be the first one who finishes it. The real purpose is to be able to cross the finish line successfully.

You feel a deep accomplishment

Since triathlon is considered to be a very intensive and difficult sport, most of the people are unable to complete them.  So, when someone is able to cross the finish line, especially when that someone is a normal person, he/she should definitely feel accomplished and proud for himself. It is a tough race; you’re allowed to show off 😉

Focused and in Control

Everyone being able to train and push himself in a triathlon is proving that he also owns a strong character. You know why? Because to properly prepare yourself for handling a triathlon, means you need a lot of discipline, dedication, control and willpower. Along with the body, your brain should be trained too. It should learn to handle stress, to control the situation, and maintain the right focal points when competing. Having control on your training schedule means you’re also training yourself to maintain the same control on your other areas of life.

Triathlons are interesting and fun

Because triathlon contains three disciplines,it means you also get to train for all three of them separately. Your training becomes far more interesting than doing the same workout routine for only one discipline.

Participating on triathlon means you get to hang out with people with similar interests as you. Spending time preparing and training for a triathlon event offers many social opportunities to expand your experiences and share your opinions and ideas with others. Also, this means you get to be and feel happier. Not to mention the happy hormones. Your brain releases Endorphins after feeling all the accomplishments and benefits a triathlon event can bring you. These hormones are one of the main reasons many people involve themselves in competing. Then, competition in all kinds of sports, especially triathlons, make them addicted!

Author Edisa CollakuPosted on December 24, 2016December 27, 2016Categories TriathlonTags cycling, Olympic games, running, sports, swimming, triathlon addiction, triathlons
Would you like to write with us? got some interesting stories and experiences you would like to share? please email them to [email protected]