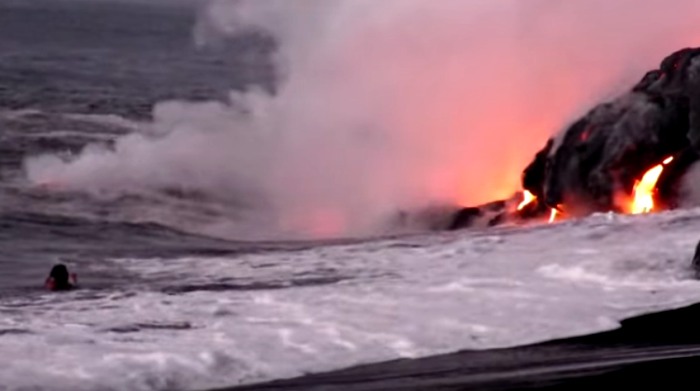 Thousands of curios people from across the world have visited Hawaii Volcanoes National Park by air, land and it seems, by sea too. Kawika Singson, a Hawaii native is the one that has dared and swam next to the lava flow a few days ago.

The bright orange lava is clearly seen as it flows into the ocean waters. When the hot rocks, along with the reeked sulfur, and scorched earth, hit the water, they expel steam and gas. In many times, it can create strong explosions.

The park has seen a significant increase of the visitor’s number to about 1,500 visitors per day. Despite this fact, it still is a dangerous area. That means, no one should visit it without the proper guidance.

But, it seems this native swimmer doesn’t mind all the risks swimming next to the lava release holds. Experts recommend that despite how much everybody wants to experience the lava flow from a short distance; there are some rules everyone should follow in order for everybody to stay safe. Since the lava can quickly, as soon as touches the ocean, react with the water, it produces extremely harmful hydrochloric acid.

Janet Babb, a geologist, explained: “It’s super-heated steam laced with hydrochloric acid from the interaction with the seawater and has shards of volcanic glass. It’s something everyone should avoid.”

No one can predict for how long the current lava flow will continue. Despite it’s longevity, it holds a noticeable potential to attract more and more visitors. Even the type that aren’t afraid of the lava and go right into the sea only to take a picture!

Author Edisa CollakuPosted on February 8, 2017February 11, 2017Categories News & Stories, SwimmingTags breaking news, Hawaii volcano, lava flow, learn to swim, swimmer, swimming, swimming tips, tourists, volcano, volcano images
Would you like to write with us? got some interesting stories and experiences you would like to share? please email them to [email protected]