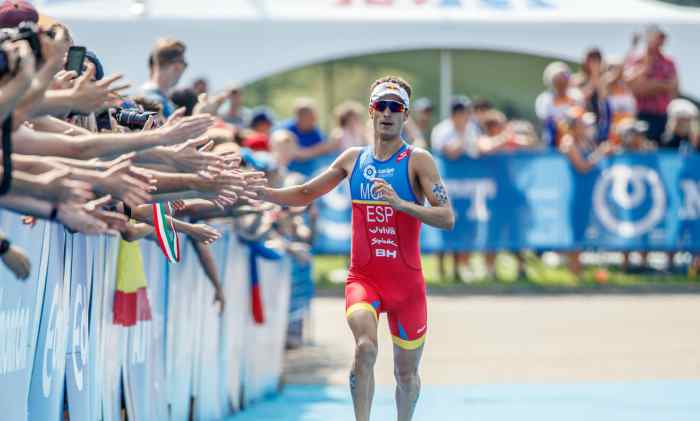 Spain’s Mario Mola was the ultimate winner in the yesterday’s WTS event in Edmonton in a race that consisted of a 750m swim, 20km cycle and 5km run.

On the other hand, Jonny Brownlee was only able to get the fourth place after previously claiming his physical condition would leave him out of the first place.

Second place went to Australian Jacob Birtwhistle who managed to get back in route after mistakenly going into a wrong path as South African Richard Murray took the third one.

Mola was able to finish the competition in 24 minutes and 52 seconds. The Olympic bronze and silver medalist Jonny Brownlee took the fourth place finishing 23 seconds behind Mola.

Is not easy to win four WTS in a year. It is, in fact, as hard as this #WTSEdmonton pic.twitter.com/TAHgD3Eik7

Yesterday’s victory was the fourth one for this season for defending leader Mola. He is already leading the classification having 3,664 points in total. Mola, 27, is followed by compatriots Fernando Alarza who has 3,172 points and Javier Gomez with 2,990.

Birtwhistle, during an interview, said: “I hurdled that barrier and I had to suffer for another lap. I had to dig really deep.”

In total there are only three races remained for this year’s WTS tittle. Montreal and Stockholm are the next hostesses of WTS races taking place in the following month. Both of August’s events award 800 points each to the winner.

On the other hand, the WTS Grand Final will take place later in September in Rotterdam. The winner will get 1,200 additional points.

Flora Duffy, 29, from Bermuda was the one claiming her fourth, consecutive victory dislodging Katie Zaferes at the top position on the general classification.

Zaferes, 28, was only able to position herself on the third place being unable to surpass her fellow American athlete, Taylor Knibb, 19, who took the second one.

Currently, Flora Duffy leads the general standings having 3200 points in total as Zaferes is only eight points behind.  Kirsten Kasper stands third with 2,677 points.