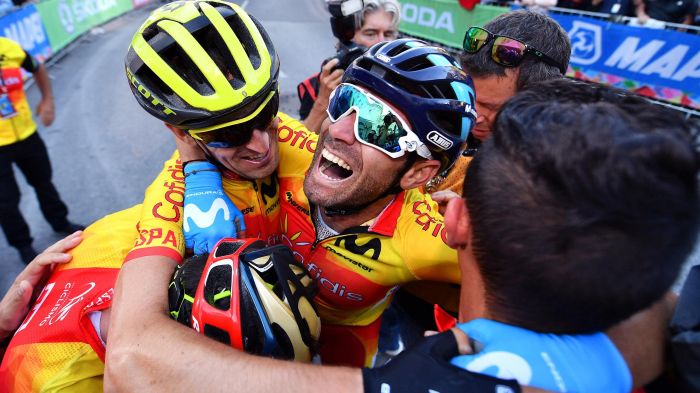 After a spectacular victory in the UCI Road World Championship’ elite men’s race, Alejandro Valverde will now have an entire street in Murcia named after him.

It was announced on Monday that the Avenida de Alicante – the main road running into the city from the northeast – will be renamed the Avenida Alejandro Valverde.

As luck would have it, the new road intersects with Avenida Miguel Indurain, another iconic landmark in Spanish cycling history named after the five-time Tour de France winner Indurain, who unlike Valverde, wasn’t a native Murcian.

After trying to win the world road race for over 15 years, the 38-year-old finally claimed a World road race title earlier in Innsbruck.

The Spaniard stood on the top step after visiting the World Championship podium seven times. He was also the first from his country to claim the winning title ever since Oscar Freire’s victory in 2004.

The cycling star was given a warm welcome into the city by his fans earlier this month, as he drove through the streets with hundreds of cyclists and fans riding behind him.

Author Edisa CollakuPosted on October 25, 2018Categories Cycling, News & StoriesTags 2018 uci championships, 2018 WorldTour UCI, Alejandro Valverde, cycling news, cycling news 2018, cycling UCI world championships news, UCI road championships, Valverde
Would you like to write with us? got some interesting stories and experiences you would like to share? please email them to [email protected]