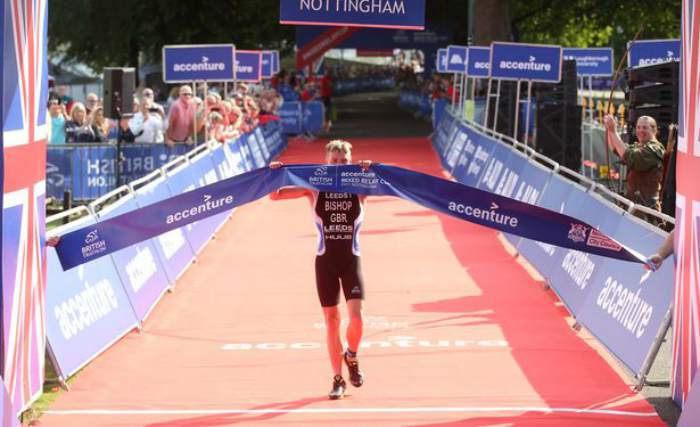 It was the Leeds team the one that beat 16 other international and domestic quarters and finally won the today’s inaugural British Triathlon Mixed Relay Cup race that was held in Nottingham.

Tom Bishop was the one to anchor the Leeds one team, as they fully completed their four-people relay over a super sprint distance in only 1 hour, 18 minutes and 58 seconds. Loughborough 1 took the second place as Canada third.

Part of Leeds 1 was also Georgia Taylor-Brown, Aaron Royle and Jess Learmonth. This mixed relay format is expected to have its Olympic debut in the 2020’s Games.

In total, there were 17 teams that entered the competition that had two women and two men, making a team of four.  Women were the first to complete a super-sprint triathlon that included a 300 m swim, 7.5 km bike ride and 1.5 km run right before activating their team-mate to take over.

When asked by BBC, about today’s event, double Olympic triathlon champion Alastair Brownlee, who is currently resting following hip surgery, stated: “The initial analogy in the idea for the Mixed Relay Cup was of the FA Cup – your local team could go through the rounds to have the chance to compete against the best. Hopefully it will go up to three or four events a year.”

Loved racing in Nottingham, course was fab and supporters were unbelievable! Chuffed with a silver medal – now onto world champs ? pic.twitter.com/h7rDw7baK2

On the other hand, Bishop, a crucial member of the Great Britain’s squad who competes on the ITU World Series circuit, when asked by BBC Sport, said:

“I thought I can’t leave it down to a sprint finish. I’m not known for that. It was still not 100% sure after the bike but I made sure.

“From the start of my leg I was nervous but by the end I was just so proud to compete for Leeds.”