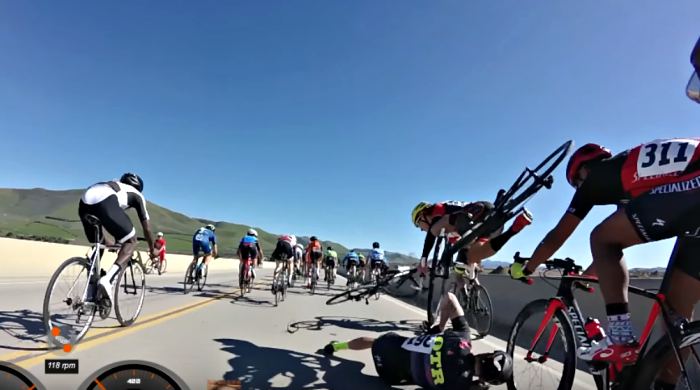 A terrifying accident left one cyclist tumbling off the bridge!

A bicycle Road Race went totally wrong this past weekend when one of the cyclists wiped out causing a chain reaction that looked totally terrifying. Fortunately, no one got hurt and everything had a good ending.

The crash happened during Santa Barbara Saturday’s Race and almost left one of the cyclists dead. It was the finish sprint race when this accident happened causing a domino effect. Once again this accident reminded us  the risks this sport can bring.

It was Mike Allec the one who made the contact with the downer riders and saw himself flying on the bridge. He was barely hanging there. Even though his bike flew more than 30 feet under his feet, he managed to hang on the barriers and preventing a terrible accident.

This is the video showing the accident’s moments during this annual Santa Barbara Country Road Race:

Mike Allec, in an interview for Inside Edition, admitted to feel blessed that this accident ended up so well. He thinks, falling on the wall may have actually saved him from further injury.  He also added that the reason he is still alive, is because of his good reflexes and a little bit of luck.