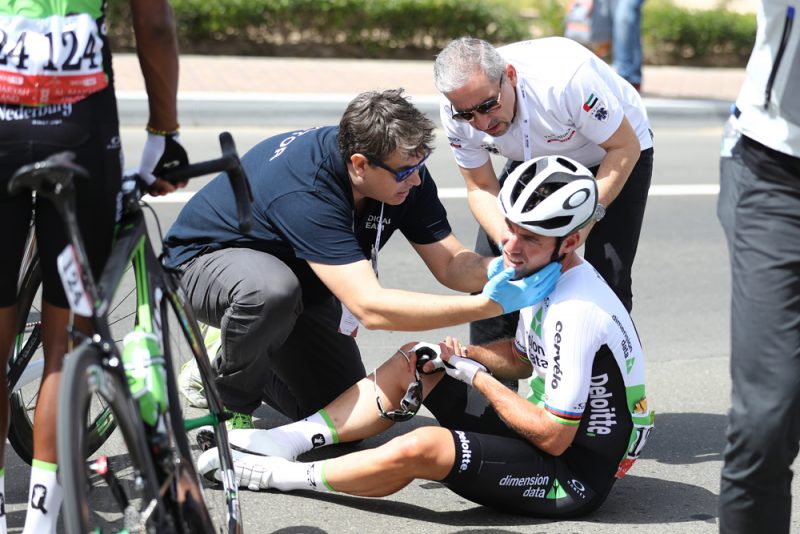 Feb. 21 – Dimension Data’s Mark Cavendish had to pull out of race after a sudden crash in neutral zone.

The Dimension Data rider has officially abandoned the Abu Dhabi race after crashing in the first five kilometers of the opening stage and now race organizers are blaming automatic brake sensors for causing Cavendish’s crash.

Unfortunately, rider’s third race of the season didn’t went so well despite having high hopes in claiming another victory at the Abu Dhabi tour besides the one he claimed earlier this month in the first part of the event. Cavendish hit the deck before being able to start the 189km opening stage which for the rest of the competitors started in Madinat Zaya and ended in Adnoc School.

“@MarkCavendish sustained a concussion and a whiplash injury after his crash today. Due to the concussion, we were not willing to risk rider safety and the call was made for Mark to stop the race.” – Dr. @Aid326

According to his team, the crash made Cavendish suffer injuries on the same shoulder he damaged at the crash both he and Peter Sagan suffered during the fourth stage of Tour de France last year. The Tour crash left Cavendish more than two months out of the road. Now his teammates are worried the same thing might happen once again.

Now that Cavendish is out of the tour, it means Dimension Data will have to get the support it needs in the sprint routes from Mark Renshaw.

Soon after the crash, race organizers came to the conclusion that the one thing to blame for Cavendish’s crash are the automatic brake sensors of an official’s car which after automatically stopping caused a ripple effect to the bunch of riders that led to Cavendish falling off his bike after losing control and balance.

“I didn’t see it happen. But there was word going around that a lot of the cars have the automatic braking system. If they don’t disengage that, then as soon as a bike rider comes close, it brakes,” Renshaw told reporters after the crash.

Stefano Allocchio, RCS Sport race director confirmed the same theory shortly after the accident took place. He was sitting on the passenger’s seat of the car that was responsible to lead the riders through the neutral zone of the opening stage. It was the same car whose sensors were triggered once the riders behind the car came close enough.

“The car braked by itself. Unfortunately, these are things that happen. This evening, we’ll have a technician deactivate it on the all the cars. We don’t want to risk it happening again,” Allocchio said.

.@Abu_Dhabi_Tour ambasador @MarkCavendish is off to a difficult start and he is out from stage 1 competitions
Get well soon Mark! #RideToAbuDhabi @TeamDiData pic.twitter.com/Hokp131mTO