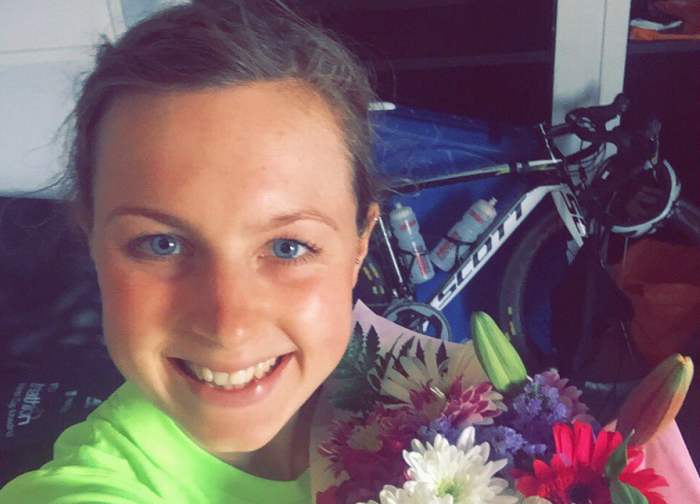 Yesterday’s Madrid ITU Triathlon Cup went really well for another British female athlete; Georgia Taylor-Brown. After the Cape Town’s ITU race and then the one held in Chengdu, the Madrid World Cup Triathlon’s well-deserved victory went to a member of the British squad.

when you come away with flowers and a sticky face, it’s been a good day ??‍♀️??‍♀️??‍♀️ fun racing #MadridWC. Hope I made Manchester smile! pic.twitter.com/SXehbxMUq9

Georgia Taylor-Brown is officially the winner of Triathlon World Cup race in Madrid. The Manchester-born athlete, 23, was really hoping to make her home city smile especially after the tough week it has been going through caused by the terrorist attack in Manchester arena that left dead 22 people.

“When you come away with flowers and a sticky face, it’s been a good day,”- Taylor-Brown tweeted. “Hope I made Manchester smile.”

The second place was held by the USA-born athlete, Taylor Spivey. Georgia Taylor-Brown was able to finish the race in just two hours, eight minutes and five seconds. 51 seconds less that the second place held by Spivey.

The European Junior champion admitted this race to be one of the toughest she has ever participated on her career. But also, it was one of the best! ”

She added: “I loved the atmosphere, the hilly circuit and I just tried to save some energy during the bike for the run course, which I knew it was going to be also really hard.”

Injuries kept her potentials away…

Even though Taylor-Brown got herself a silver medal after participating in the 2013 ITU World Junior Triathlon event, unfortunately, she suffered different injuries. Those issues made her take a long off-season period keeping her away from any international competition until last year.

She was placed in the second place during the ETU European Cup competition earlier this year. Taylor-Brown looked in a  pretty strong shape during the yesterday’s race. It seems the focus she put on the run made her pull away a 51-second winning margin over Spivey.

Author Edisa CollakuPosted on May 29, 2017May 30, 2017Categories News & Stories, TriathlonTags Georgia Taylor-Brown, ITU Madrid World Cup, ITU triathlon, ITU world cup, Madrid triathlon, triathlon breaking news, Triathlon news
Would you like to write with us? got some interesting stories and experiences you would like to share? please email them to [email protected]