Giro d’Italia (VIDEO): Geraint Thomas and Adam Yates get involved in a crash 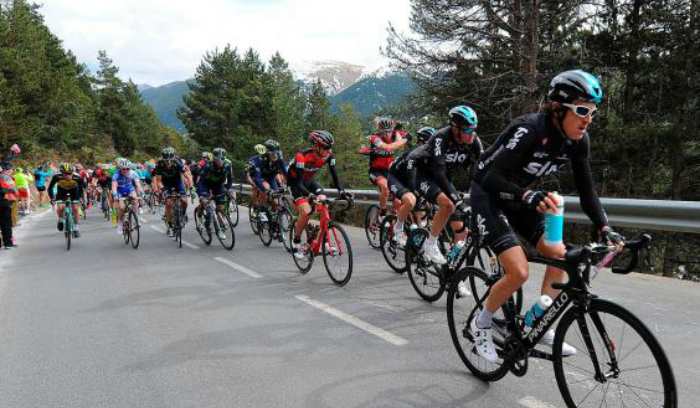 Nairo Quantana eventually won the 9th stage of Giro d’Italia not letting the crash affect him like it did with Thomas and Yates.

Even though both, Welshman Thomas and also Spanish team-mate Mikel Landa who were teams Sky’s leaders during most of the Giro’s stages, suffered major losses of time after the crash which happened during the last 15 kilometers. The stage involved 149 km route in total, starting from Montenero di Bisaccia and finishing at Blockhaus.

How did the crash happen?

Cyclists were not only riding in a high speed, they were also spread all across the road width. That is why; there was no place for Wilco Kelderman from Sunweb team to go.

He eventually ended up hitting the stationary bike and tumbled. He then wiped out many others, especially from the Team Sky squad including both Landa and Thomas.

In an interview, after the crash, Thomas added: “It’s ridiculous. That shouldn’t happen. We were all racing for the bottom of the climb.

Next thing I know someone in front of me hits the motorbike, we go down. My shoulder popped out (of its socket) as well. I felt good, and then I crashed. That was it. Race over. It’s really disappointing. I’m a bit angry at the minute.”

Eventually, the stage was won by Quintana who finished 24 sec ahead of Pinot (second place) and Tom Dumoulin from Team Sunweb, followed by Nibali who was exactly one minute behind.

Nairo Quintana is the king of the Blockhaus #Giro100 pic.twitter.com/Zf3K7dYYjZ

Currently, Quintana leads the race by 28 seconds from Pinot and Dumoulin in third place. Today’s the rest day for Giro d’Italia racers making Bauke Mollena fromTrek-Segafredo team to take time and focus his energies in winning.

He will need this day to move himself from the fourth place since he’s only 51 seconds behind the third one. Nibali gets to have the fifth place being one minute and 10 seconds behind.

Author Edisa CollakuPosted on May 15, 2017May 15, 2017Categories Cycling, News & StoriesTags Adam Yates crash, cycling latest news, cycling news, Geraint Thomas crash, giro d'Italia, giro d'italia 2017, Giro d'Italia latest news, stage 9 giro d'italia
Would you like to write with us? got some interesting stories and experiences you would like to share? please email them to [email protected]