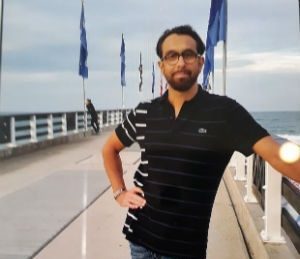 The family of the missing Ironman contestant, who suddenly disappeared right before the African Ironman Championships in Port Elizabeth, are desperate to find their family member asap.

They have now offered a reward to anyone who might have seen him or that can give information regarding his sudden, mysterious whereabouts.

David Rene Roger Bellet-Brissaud arrived in Port Elizabeth last week on Thursday along with his wife Lydia. She was the one to notice his disappearance at around 1am after waking up alone in their hotel room.

David’s brother Gael Bellet-Brissaud, when speaking through an interpreter yesterday morning, publically offered a R12‚000 reward. It will go to anyone who can deliver “concrete” information about triathlete’s unexplained disappearance. He even claimed that they are currently speaking to French police and are asking to extend his brother’s search internationally.

On the other hand, his sister Vanessa Perret Bellet-Brissaud, when asked about her brother, described him as “an ordinary guy”.

“He doesn’t smoke or drink. He is not a man with enemies. And he worked at the same forestry company for the last 15 years‚” she added.

David is believed to be wearing a black Adidas hoodie and blue jeans. Anyone who can provide any type of valid information on Ironman’s whereabouts is pleased to contact Detective Warrant Officer Eric Mathews at SAPS Humewood: 083-380-3714

Author Edisa CollakuPosted on April 17, 2018April 17, 2018Categories News & Stories, TriathlonTags African Ironman championships, breaking news, Ironman news, missing french triathlete, missing Ironman contestant in Port Elizabeth, missing triathlete in Africa, Port Elizabeth missing triathlete, Triathlon news
Would you like to write with us? got some interesting stories and experiences you would like to share? please email them to [email protected]