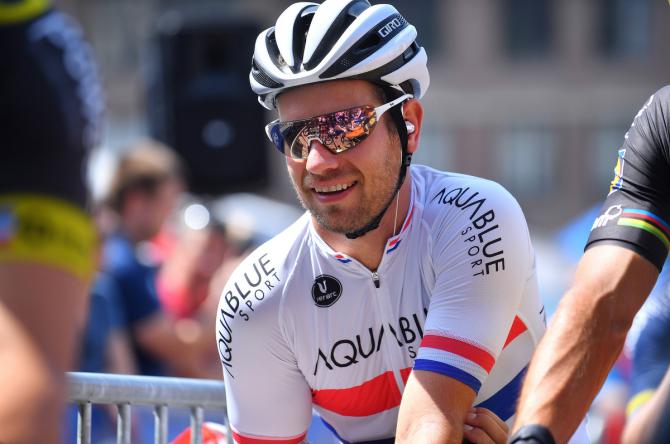 Adam Blythe has finally returned to the team where he started his professional cycling career. The Briton has joined the 2019 season with Lotto Soudal, after the demise of his team, Aqua Blue Sport. Blythe spent the past two years with Aqua until is disbanded abruptly in August.

Adam joined Marc Sergeant’s team– which was known as Omega Pharma-Lotto at the time – in 2010, after riding as a stagiaire for the Belgian squad in 2009. Blythe proved his talent at the Circuit Franco-Belge in 2010 where he stood victorious. Later, he joined his team leader Philippe Gilbert into BMC just before the2012 season.

On Monday, Blythe made a statement saying that he was honored to return to Lotto Soudal for 2019 season once again. The Briton joined the renowned Belgian cycling team for an internship at the age of 20 and later signed with the WorldTour team. 28-year-old Blythe has raced for six teams over the course of 8 years of his professional career.

In 2014, he dropped to Continental level after he left BMC to join NFTO. But he quickly returned to World Tour level the same year after winning the RideLondon Classic.

In 2015, Blythe rode for Orica-GreenEdge. The following year he rode for Tinkoff and won the British national title. But the team disbanded by the end of the season, leaving the 28-year-old no choice but to join Aqua Blue Sport. Blythe only managed to claim one victory with the Irish Pro Continental team in June at the annual Elfstedenronde held in Belgium.

After his return to Lotto Soudal, Blythe will team up with Caleb Ewan. He is his former GreenEdge teammate who has been named the new sprinter in Lotto. Ewan was signed as a replacement for André Greipel.