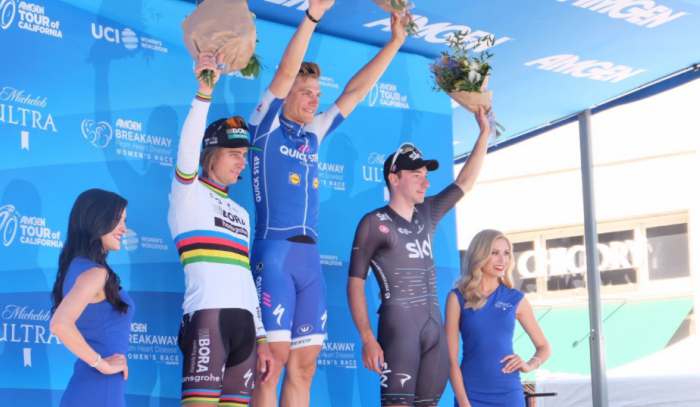 Marcel Kittel is officially the overall leader of stage one of Tour of California. The German cyclist from Quick Step team was able to out-sprint a stellar field of fast cyclists during the opening stage beating Peter Sagan, world champion, to the line.

Tour of California, now a WorldTour level, has fired hopes among many other cyclists. Even though Sagan has won more than 15 stages until today, and is also the overall winner of Tour of California in 2015, he was “forced” to follow Kittel on his fast and precise riding that gave him the stage victory.

Elia Viviani from Team Sky did also preform pretty well especially during the last part of the stage(167.5km long), but unfortunately, was unable to finish it off and take another, second, win of this year.

REPORT: Elia Viviani sprinted to third as #AmgenTOC got under way in Sacramento.

On the other hand, Kusha (Alexander Kristoff), was one of the most unbalanced sprinters disappointing his teammates and fans taking only the 13th place. Even though he occasionally seemed to progress, he was unable to deserve a better place on this stage.

Teammates expect him to give a better performance in the sprint stages that are coming up during this tour.

Today, the  143km stage ends in San Jose and it is a route which is full of classified climbs.

Tour of California 2017 stage one

General classification of Tour of California 2017

Author Edisa CollakuPosted on May 15, 2017Categories Cycling, News & StoriesTags #AmgenTOC, cycling latest news, cycling news, Elia Viviani, Marcel Kittel, Peter Sagan, Tour of California, Tour of California 2017 news
Would you like to write with us? got some interesting stories and experiences you would like to share? please email them to [email protected]