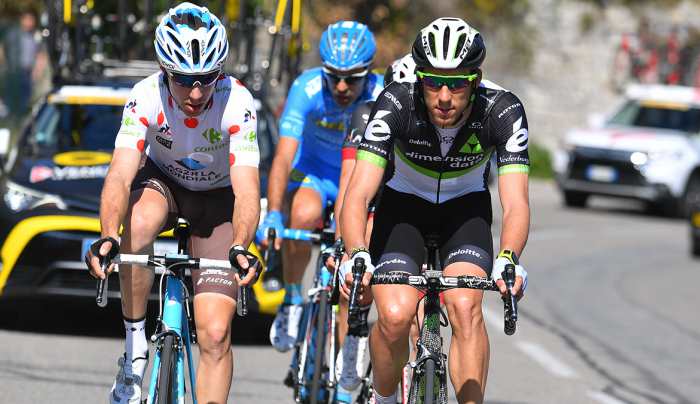 Simon Yates from Orica-Scott was the one to take the solo win and his first victory of this year’s season attacking form the reduced peloton in the final 20 km of stage 6.

He was able to soon build an enormous advantage towards his GC rivals with more than a half minute when he was passing through the 1.3 km final climb of this stage. The second place was a real battle with Sergio Henao form the Team sky and Mikel Nieve also by Team Sky. Mikel was the one to finally take the deserved second place followed by Richie Porte from the BMC team.  This stage was concluded by the overall race leader Julian Alaphilippe being led home by his teammate Dan Martin in fourth place.

Sergio Henao from Team Sky team was the one to move back on Saturday from the general lead with only one stage remaining, after getting the fourth place in the race’s big mountain stage.

On the other hand, Richie Porte from the BMC team was finally able to recover from the preceding week  by putting a solo attack to victory ahead of Alberto Contador from the Treck Segafredo team and also, Daniel Martin form the Quick Step Floors team.

Martin is the one to now move on to the second overall behind Henao overall, with Contador a close third.

The overall victory of the 2017 Paris – Nice was wrapped up by Sergio Henao from the Team Sky. Alberto Contador from Trek-Segafredo missed out by only two seconds.

The Spaniard was able to attack from 50km out, but, unfortunately, was unable to shake-off Colombian Henao by enough time to claim victory.

Paris-Nice is over. What a hard race in all kind of weather conditions. Next up Milan-SanRemo!… https://t.co/WM0y9evjcK

David de la Cruz from the Quick-Step team was the one to win the stage having spent the day in the breakaway.

Henao becomes only the second rider from Colombia to ever win Paris-Nice. Carlos Betancur did the same thing back in 2014.