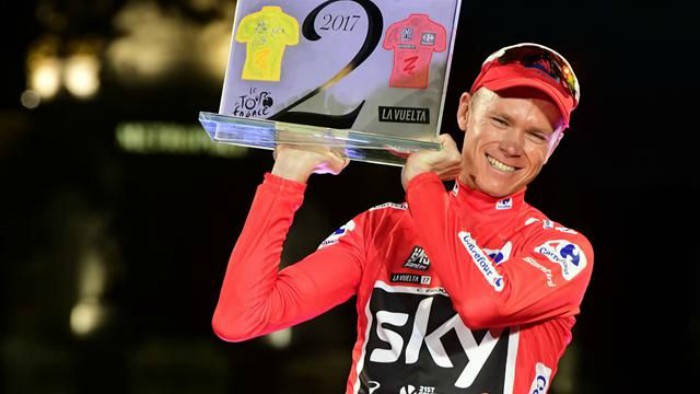 Chris Froome is set to lead Team Sky at this year’s Giro d’Italia event which will start on May 4 on Jerusalem.

Next month’s Grand Tour is quite important, especially for Froome. He is now trying to win his third straight Grand Tour after taking Tour de France in 2017 and then Vuelta a Espana in September last year.

It was during the Spanish Grand Tour when Chris Froome’s adverse analytical test results indicated twice the allowed amount of an asthma drug in his urine. Currently speaking, UCI is still investigating the case and hasn’t come with a conclusion yet.

Going by the instincts

Despite the fact the final verdict may cancel his Vuelta a Espana big title and maybe Tour de France’s one as well, Froome said that it was a risk he wanted to take and that he would regret it for the rest of his cycling career if he did not fight to win the Giro and become the third man in the world to have ever won three consecutive Grand Tours.

“The Giro is special and full of history. And I am looking forward to racing it again after almost a decade. I’ve had a different start to the season. I’ve obviously been aiming to try and reach my peak quite a bit earlier than usual. But the target of going for a third consecutive Grand Tour has given me new motivation,” Froome said.

“Of course there is an element of risk involved in targeting the Giro before the Tour. But I think I would regret it for the rest of my life if I didn’t give this race a go.”

When asked about the test results, he said: “I also recognize the wider issues. And I am doing everything I can, together with the team, to help resolve them as quickly as possible.

“In the meantime I am focused on racing. I would love to win the maglia rosa (the pink jersey for the winner of the Giro). But I am under no illusions whatsoever about how hard the race will be.”