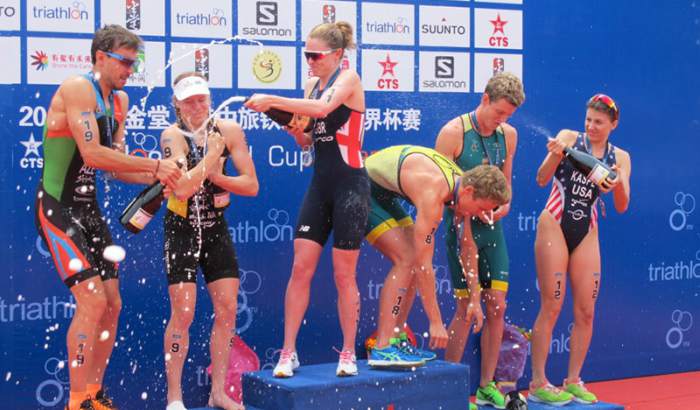 The U.S triathlete from North Andover, Massachusetts, Kirsten Kasper, was able to earn a bronze medal at ITU Triathlon WC race in Chengdu, China back on Sunday. On the other hand, Chelsea Burns from Seattle was able to win the fifth place.

Both U.S triathletes made sure to make their home country very proud. They both took a place in the top-5 in the general classification.

This event was the first official World Cup of the season that features a semi-final format. It lasted two days and included sprint and super-sprint distances.

For Kasper, this was her first return to the World Cup since her victory in Salinas, Ecuador in 2016.

“I was in second on the run, and said to myself, ‘I am getting on this podium today.’ I didn’t come all the way here not to make that podium, so I was very determined to get to that line. I ran at Georgetown University, so running is what I’ve been doing all my life. Definitely I have confidence when it comes to the run, and I knew I could push all the way”- added Kasper.

Now Kirsten Kasper and other professional triathletes from her home country are heading to compete and prove themselves at the second Third Worlds Triathlon Serie of this season which will be held in Yokohama, Japan next weekend.

The complete results of the Elite Women

Author Edisa CollakuPosted on May 8, 2017May 8, 2017Categories News & Stories, TriathlonTags China Triathlon, Kirsten Kasper, Kirsten Kasper third place, triathlon latest news, Triathlon news, triathlon world cup, World Cup triathlon
Would you like to write with us? got some interesting stories and experiences you would like to share? please email them to [email protected]