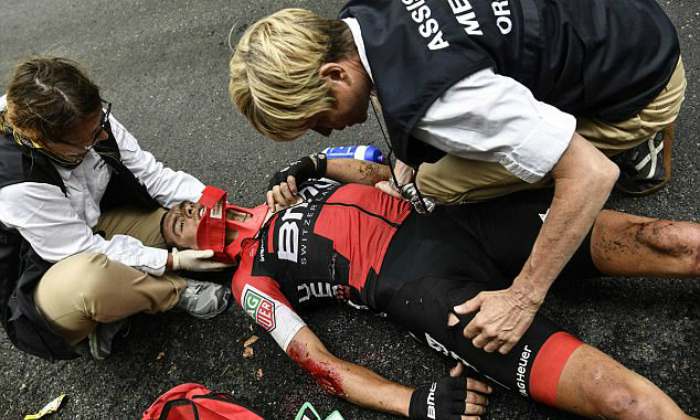 Stage nine brought definitively a rough and dramatic day for some of the Tour’s best riders. While Froome was still able to keep the yellow jersey, Richie Porte and Geraint Thomas were involved in a dangerous crash which left both of the riders with serious consequences.

Such a shit day!!! Nowhere to go when Rafa went down right in front of me. But I’m ok though, thanks for all your messages!! pic.twitter.com/lUTi9m6Nzy

The crash made Thomas abandon Tour de France leaving the other Team Sky rider, Chris Froome, lacking his key helper. After being brought down by Rafal Majka, Thomas, who until that moment was at the second overall place, fell hard and broke his collarbone.

Thomas, who was able to win the first stage of the Tour and keep the yellow jersey on until Froome took it after winning the fifth stage, crashed on the damp descent halfway through the mountainous 181.5 km-long stage that started in Nantua to Chambery.

When asked about the incident, Thomas said: “I crashed at the Giro on stage nine and its stage nine again here. I was lying second overall on both days as well. It’s just so disappointing.” Thomas continued.

He admitted everyone to be nervous wanting to be at the front. He said he knew while he was riding that a few other riders were continuously battling to get between him.  “I let Majka in and then he came down right in front of me on a straight bit of road. I had nowhere to go, went over the top of him, and landed on my collarbone”- added Thomas.

Team Sky’s manager, Sir Dave Brailsford, couldn’t hold back his sadness saying: “G has broken his collarbone for sure, which is devastating for him. He had the crash in the Giro, then the rollercoaster of coming here and being in yellow after winning the first stage, and then breaking his collarbone today. We’ll get our arms around him and make sure he’s all right. We’ll get him back on track but that’s not nice to see.”

Relieved to finish safely but thoughts are with everyone that crashed today, especially @GeraintThomas86 & @richie_porte ? #TDF2017

Involved in the yesterday’s crash was also Porte who like Thomas, suffered a broken collarbone and also a broken pelvis.

BMC declared they strongly believe Porte will be able to get back with racing in following month. The crash moment seemed to be too serous for him; despite the fact his team has faith in his recover abilities.

The moment of crash saw Porte near Astana’s rider, Aru who was able to move and stay upright making Porte deviate through the grass and then falling hard across the tarmac ending up on to an abrupt stop on the opposite side of the main road. This moment also involved Quick-Step Floors’ rider Dan Martin, who found himself blocked without any place to go as Porte rapidly passed in front of him.

“Richie Porte was transferred to the Centre Hopitalier Metropole Savoie in Chambery where he was evaluated by Dr. Zerr. He underwent X-rays to determine the extent of his injuries.

His condition was stable from the beginning, he was responsive, and he remembered everything that happened before and after the crash,” – BMC’s doctor Max Testa explained. He also admitted that Porte’s condition won’t require any surgery.